We love our little island and we’re always exploring. Here’s a bunch of crazy facts shared by the residents and historians of Lanzarote. Hope you enjoy them.

We have a royal residence on the island. King Hussein of Jordan ordered the construction of La Mareta by the sea in the town of Costa Teguise. It was later given to the Spanish Royal family and is often used by Spanish prime ministers. Most recently Pedro Sánchez during Christmas 2018. Although access to the building is of course strictly controlled, there are rumours of plans to open it to the public in the future.

In more royal links, Princess Alexia of Greece and Denmark is known to live on Lanzarote. Her family enjoy a home in the beautiful Puerto Calero marina, just along the coast from Puerto Del Carmen. Their house was designed by her architect husband, Carlos Javier Morales Quintana.

During the most famous eruptions of 1730 to 1736, Lava covered a quarter of the island’s surface, including the most prised farming soil and 11 villages. 100 smaller volcanoes were located in the area called Montañas del Fuego, the “Mountains of Fire”. The area remains protected and is the most popular tourist excursion.

After the immense eruptions and droughts that further damaged the ravaged land, a significant part of the population of Lanzarote relocated to Cuba and the Americas. The island still has strong links with these areas and you’ll often meet people from the southern USA, Cuba, Venezuela, Peru and Columbia resettled into our community.

We didn’t have tap water as such in Lanzarote until 1964. It was late that year that water started to flow from first the first desalination plant in Europe. It was created and is still located in Punta Grande (Arrecife). Of course our demand for water continues to increase as the island population grows. At the beginning of 2016, the new general tank of Zonzamas was completed which has a daily storage capacity of up to 30.000 m³ of water.

The earliest records of our capital, Arrecife, date from the fifteenth century when it was no more than a very small fishing settlement. The original name, Arrecifes, refers to the volcanic reefs which now sit under the main beach. These reefs were used as hiding places for boats during frequent pirate attacks including the 1571 attack which almost totalled the city once again.

The Canary Islands, lying as they do at crossroad of the American, African and European sea trade, were a favourable area for piracy for hundreds of years. The fortress of Santa Bárbara was constructed in the 15th century as a watchtower and refuge for the residents threatened by pirates. The impressive building which can be found in Teguise, was transformed in 2011 into a museum on the history of piracy in Lanzarote. The site is currently undergoing restoration.

The weather in Lanzarote is not as predictable as many tourists believe. Whilst it’s almost always warm and dry on the coast, mist and fog are common on the Northern hills, and there are terraced fields which remain green throughout the year in these areas. Although usually “springlike” throughout the seasons, hot winds from Africa can bring days of burning heat, peaking above 40 Celcius even in winter.

Whilst we do have incredibly beautiful resorts in Lanzarote, many hotels were simply never finished due to lack of permissions or were built against our strict regulations and may one day be forced to be demolished. 24 hotels in Lanzarote have been the subject of cases brought by the island’s own government. At one stage, six of the seven island mayors were caught up in police inquiries. As islanders, we fight hard to keep our expansion under control.

Lanzarote is not known for greenery. However there are several places where the gardens are honestly spectacular. One is within the lobby of the Melia Selinas hotel (Costa Teguise) which contains impressive botanic gardens amongst artworks created by famous island visionary César Manrique. Another is the Jardín de Cactus of Guatiza in which you can find 4,500 specimens of 450 different species, of 13 different families of cactus from five continents.

Think of desert landscapes and you often think of camels. Local residents tell us that the first camels brought here were tied to the side of boats rather than on deck. Whilst it’s true that they were quite common here between the end of the 15th century and the beginning of the 16th century, their usefulness as a method of transport dwindled with the introduction of modern vehicles. Today the only camels that remain are connected with the tourist excursions and one or two private owners.

The Witch of Haría

Ask local residents about the witch of Haría and you’ll get a smile. The witch isn’t a person as such, she’s a whole town! Visit the mountains around the town of Haría during sunset or sunrise and you’ll see La Brujita (the witch) on her broomstick delineated by the lights of the town forming her shape when seen from above. Of course we have plenty of spooky buildings, so there may be more to this story than you’d imagine but nobody is telling.

Quieter Than You Think

When you think of the Canary Islands you might imagine lots and lots of resorts and big cities like Las Palmas and Santa Cruz. In reality, as of the last count in 2018, fewer than 150,000 people live on Lanzarote. Only 5% of those are British expats. Including everyone we have roughly the same population as St Albans, England despise being having an area of 845km². Tenerife on the other hand is now nearing one million inhabitants.

Tourism is by far our biggest industry, replacing farming, fishing and the production of salt. That said, we do still have farms, despite having a harsh volcanic landscape. Instead of soil and manure, we grow our vegetables in picón, a fine volcanic gravel which retains moisture. Being a windy place, we usually grow the crops within little shelters made of the same material. It’s these curved shapes you see across all of the planted areas when you drive through the interior.

Fishing is a popular pastime here although you must have a permit. It’s possible to catch bluefin tuna, white marlin and barracuda when the conditions are right. It’s also not uncommon to hook a hammerhead shark. Don’t worry though, they don’t come towards the coast and won’t attack a swimmer. In total there have been only 6 shark attacks throughout known history in the Canary Islands and none in Lanzarote.

Is it Life On Mars?

On first seeing the interior landscape, people often exclaim that it looks rather like Mars! It’s more than a little similar. In 2018, European Space Agency astronauts test-drove rovers on Lanzarote, flew swarms of drones and navigated a rover through a complex, 6km-long lava tube created by a 21,000-year-old volcanic eruption. In some places the landscaper is as close to outer space as most of us will ever get. It’s breathtaking and humbling.

Of course all of these facts and figures have been put together over a glass or two and some local tapas, so we don’t guarantee their accuracy. What we do know for sure is that our little island is utterly unique. And we’d love for you to visit!

Image by Sean Benesh on Unsplash 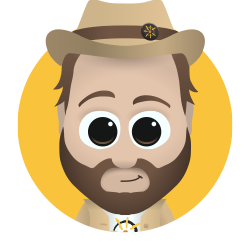